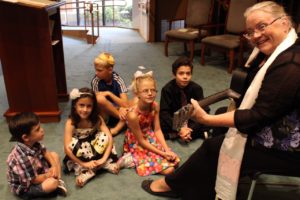 Cantor Kim Singer is delighted to be serving Temple Shir Shalom, and looks forward to sustaining and building on the congregation’s strong musical heritage. She comes to central Florida after seven years in central Massachusetts, which included shepherding her congregation through a merger, serving as a force of stability through several transitions in rabbinic leadership.

Before embarking on her career in Jewish music and education in the late 1980s, Kim was a founding member of World Mother Goose Children’s Theater in the Seattle area. Indeed, it was this experience that led to her being tapped to fill a vacancy in a first grade religious school classroom, setting the stage for her decision to enter the cantorate.

Kim incorporates a wide variety of musical styles into services, blending traditional nusach (prayer melodies), classical liturgical compositions, and popular Jewish melodies into an inspiring and uplifting experience. She brings a modern sensibility to traditional texts, with a balance of thoughtful insights and a “wicked” sense of humor.

Kim has made good use of her theater background writing Purim Shpiels and conducting Tot Shabbat services with a precocious brown bear named Kimbu. She has directed volunteer and professional synagogue choirs and bands. She is also an accomplished composer, whose work ranges from original children’s music to pieces for choir, organ and flute, and often incorporates melodies from traditional nusach and cantillation.

Kim has been active in the Guild of Temple Musicians and the Coalition for the Advancement of Jewish Education, serving in positions at the national level in both organizations. She has taught and performed at national Jewish education and cantorial conferences.

Kim is a native of Seattle, WA, and holds a Bachelors degree in Drama from the University of Washington. She has served a number of congregations in Washington, Florida and Massachusetts over the past 20+ years. Her Cantorial Ordination, Masters of Jewish Education and Certificate in Family Education are from Hebrew College. In 2010 she was awarded the title of Reform Jewish Educator (RJE) which recognizes excellence in synagogue education within the Reform movement.

She is also a veteran of numerous Disney races, including two Dopey Challenges (48.6 miles) and is looking forward to continuing her quest for bling (those race medals are so shiny…).

Kim can be reached by e-mail at CantorKim@templeshirshalom.org. 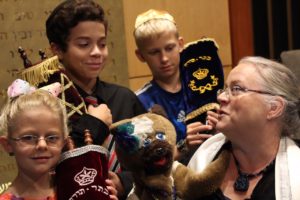